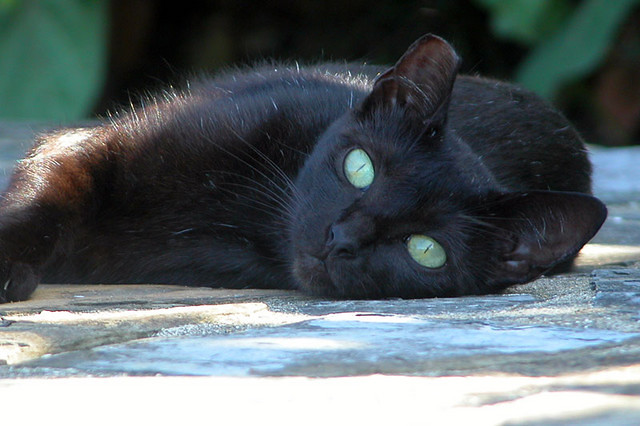 Alice in Wonderland, a character in Jane Eyre Gets Real by Annabelle Troy, is missing her cat Dinah. When Alice was plucked from her book and made to live in contemporary NYC, beloved Dinah was left behind. So Alice went to an animal shelter to adopt a cat. She fell in love with a vivacious green-eyed kitten, but because it had black fur the agency suggested she adopt in November. Many animal shelters don’t let black cats get adopted right before Halloween; too many people use them as living decorations, abandoning them after the holiday; or they can be cruelly used for pranks. For the latter reason, it is suggested that if you already own a black cat, keep him/her inside around Oct. 31st.

Contrary to popular belief, the “unlucky” black cat is not discriminated against when it comes to adoption. It’s simply that more black cats exist than white, gray, or brown ones.  According to the ASPCA black cats represent 31% of all feline adoptions annually, followed by gray then brown cats. However, black-coated animals show age more quickly; silver hairs show up easily on that color of fur, the same way dark-haired women have to dye their roots more often! When it comes to taking a selfie with black cats, they can be hard to photograph. Non-professionals may find the black cat comes out like a dark blot, while the fur of a lighter-colored cat catches the light. (Fair is always easier to photograph which is why early Hollywood preferred blondes with pink skin tones over “exotic” types.)

While medieval black cats were historically accused of being “familiars”, messengers who traveled at night between the witch and the devil, some cultures have revered them. In ancient Egypt black cats were thought to bring their owners good luck, which is still considered to be the case in modern Japan and parts of Britain. In fact there is an Old English rhyme that goes:

Black cat, cross my path
Good fortune bring to home and hearth
When I am away from home
Bring me luck wherever I roam