Mr. Darcy who is a character in Jane Eyre Gets Real first appeared in Jane Austen’s Pride and Prejudice, which was published in 1813. Just as the English escaped Napoleonic rule so did Fitzwilliam Darcy escape a childhood ruled by the French #Republican calendar. From 1793-1805 (as well as for 18 days during 1871, by the Paris Commune) France, high on its victory, heady with notions of liberty, egality and fraternity, abandoned the Gregorian measurements used by everyone else and introduced Revolutionary time. Its aim was to remove all religious and royalist influences from the lives of the people.

Though there were still periods corresponding to the twelve months, these “months” were now divided into ten-day segments called decades. The tenth day, known as decadi, usurped Sunday as the traditional day of rest. The beginning of the year was the colorful Autumn Equinox, not dreary old January first.  Each Republican month was given a poetic name inspired by nature such as Brumaire, meaning mist, Prairial (meadow), Thermidor (summer heat), Messidor (harvest). Fun fact: An unknown British wag christened these months Wheezy, Sneezy and Freezy; Slippy, Drippy and Nippy; Showery, Flowery and Bowery; Hoppy, Croppy and Poppy–which, amusingly enough, foreshadowed the names Walt Disney would at a much later date give Snow White’s dwarves.

If this wasn’t all radical enough each individual day of the year got a name or “dedication”.  Some examples: 22 Sept. was known as Grape, 10 October Sunflower, 15 December Cricket (for the insect not the English game); there were also days for the watering can, the quince, cotton, garlic, tobacco, hemp and horseradish; you get the idea. Ordinary objects, beautiful plants, useful crops were meant to replace the saints’ names which had heretofore been associated with the Christian year.

It was all very pretty but, like the epochs of human history, this concept of time proved to be fleeting. When Napoleon fell France reverted back to plain old Gregorian time which, after all, had always been good enough for Mr. Darcy.

Jane Austen was born on December 16, 1775, once known as Frimaire (Frost), Day of the Pinenut. 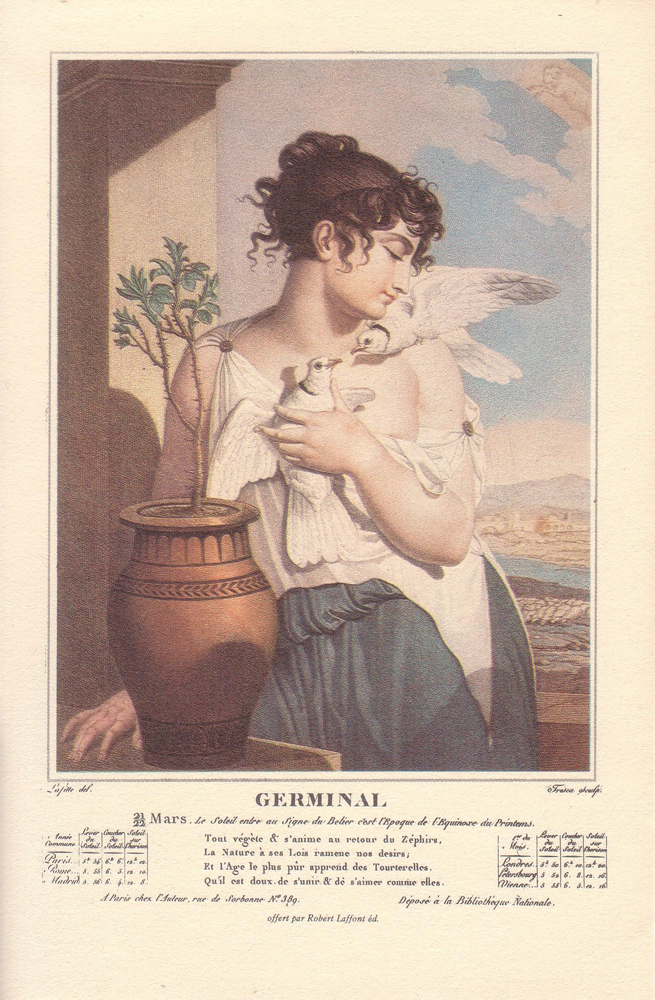 2 thoughts on “All #Calendars Are Not Created Equal”