We think of #Valentine’sDay as a time to exchange cards, flowers and Godivas. But as David Copperfield, a character in Jane Eyre Gets Real, so vividly remembers, the Victorians had a special way of showing their devotion: a common coin, sanded then engraved with all manner of sentimental designs such as entwined initials, hearts, doves and roses, even entire pastoral scenes, usually made by a man and presented to his beloved.  They lasted longer than a bouquet and were easier than scrimshaw! It became popular to sell premade love tokens at country fairs–to any gentleman who lacked the time or skill to carve, or who simply wanted to give the lady he was walking about with a souvenir more substantial than candy floss. You could also buy fancy examples, made by a master engraver, at the corner jewelry store.

The exchanging of love tokens was common in both America and England as well as Germany, Canada and Australia–where one might be hastily pressed into the hand of a prisoner doomed to transportation.  The practice, which may have originated in medieval France (as part of the Catholic marriage ritual), lasted well into the early 20th century. All manner of silver, bronze and copper coins were used, including farthings, quarters, dimes and sixpences. One essential thing about love tokens: even in the industrially obsessed Victorian period, a token could NEVER be mass produced. Whether crude or ornate, each token was hand-crafted and therefore as unique as each human heart. 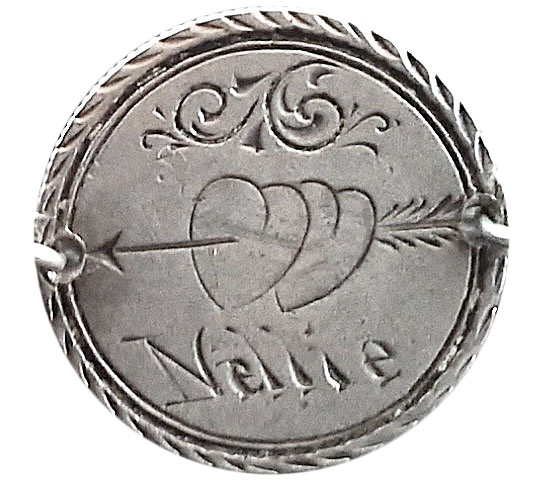